A hadron consists of quarks bound together by the exchange of gluons. Experiments have shown that the number of quarks in a hadron is either two or three. When a hadron consists of a quark and an anti-quark it is called a meson (means moderately heavy). When it consists of three quarks it is called a baryon (means heavy). An explanation for the selective existence of hadrons of two or three quarks may be found in the colour force that connects them (see superstring confinement). 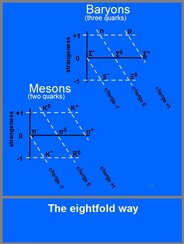 Depending on the number and kinds of quarks involved, the different mesons and baryons can be grouped into families. As early as 1964 proposals for a 'periodical system for quarks' were brought forward independently by Yuval Ne'eman and Murray Gell-Mann, the latter naming these patterns the 'Eightfold Way' (see figure). Two examples of well-known baryons are the proton and neutron.

2. Links to interesting sites with information about hadrons

http://www2.slac.stanford.edu/vvc/theory/hadrons.html (explanation and charts of some baryons and mesons)