In the preceding section the blue path was created by arranging the operators according to evolutionary level and closure dimension. A more condensed arrangement is possible by leaving out the blue line. I have named the ranking without the blue line the operator hierarchy. Of this hierarchy two versions can be distinguished; a sensu stricto version including only the operators, and a sensy lato version including also the pre-operator hypercyclic sets and the interfaces.

When applying a sensu stricto interpretation only the operators are included. This limits the operator hierarchy to hadrons, atoms, molecules, bacteria, eukaryote cells and the multicellular stages of pro- and eukaryotes and finally the hardwired memons. 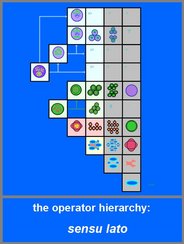 When applying a sensu lato interpretation all systems of the blue path are included. Consequently, the hierarchy includes: the superstrings, the superstring hypercycles and the quark confinement, the atom nucleus and the electron shell, the autocatalytic set and the cell membrane and the neural hypercycle and the sensory interface. When talking about the operator hierarchy, I normally refer to the sensu lato interpretation.