The fundamental particles belong to two major families: the force carrying bosons and the matter particles, the fermions, that 'feel' forces but don't convey them (Close 1983, Pagels 1985, Hawking 1988, t Hooft 1994). 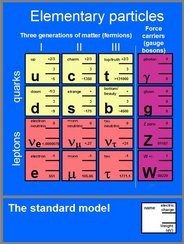 Bosons. Bosons (rightmost column of the chart) have an integer spin (0, 1, 2) and are the carriers of forces. The bosons at this level are fundamental in the sense that they cannot be decomposed in smaller particles (at least as far as is known at the moment). At a higher level we will later also encounter composite bosons, composed of several elementary particles. Particles with integer spin are not subject to the Pauli exclusion principle forbidding that two particles in the same state exist at the same time in the same place. Not having to obey the Pauli exclusion principle, bosons can pass through each other.

Fundamental bosons with spin 2 are called gravitons. The gravitons have no resting mass and convey the gravitational force.

Fundamental bosons with spin 1 are the photons, the W and Z particles and the gluons.

Finally, still hypothetical fundamental bosons with spin 0 are the Higgs particles. These are expected to cause the mass of all other particles.

Quarks generally have a high mass. The family of the quarks includes three types of up particles and three types of down particles. The up-quarks are called 'up', 'charm' an 'top/truth'. the down-quarks are called 'down', 'strange' and 'bottom/beauty'. Every quark may carry one of the three colours of the colour force (red, green/yellow or blue). As every colour has an anti-colour (anti-red, anti-green or anti-blue), there exists an antiquark with the corresponding anticolour for every quark.

2. Links to interesting sites with information about superstrings

http://www.phys.ufl.edu/~acosta/phy3101/quarks/sld005.htm (power point presentation about the discovery of ever smaller particles, including tables of quarks and leptons)

http://www.fnal.gov/pub/inquiring/physics/neutrino/discovery/chart.html (Fermilab chart of fundamental particles in the standard model)

http://www.fnal.gov/pub/inquiring/timeline/21.html (Symmetry operations on an octahedron brought Gell-man and Neeman to a theory of quarks in hadrons)